The anniversary of our daughter’s finding day was just a few weeks ago. I always start to wonder at this time. It’s difficult to imagine the events surrounding that day. Although I have photos and information about the area, I still wonder . . . Was it hot that day? Or rainy? Was it day or night? Was she sleeping when she was left there? What did it sound like? Smell like? I wonder how long it will be before my daughter asks these same questions. What will I tell her?

I’m so happy that I can tell her what it was like at the SWI. I feel fortunate that we were able to visit Dianjiang SWI when we adopted our children. I vividly remember the smoky smell in the air, the dampness and cold of that January day. She especially likes to hear that our guide told us it was a “good omen” when the clouds parted and the sun shone when we entered the town - as it is usually very overcast there in the winter.

I am thankful that I can also tell my daughter about the good things that are happening in her former home because of the kindness and generosity of each of our donors and sponsors. I am amazed by the generosity and commitment of others who have been touched by the children at Dianjiang. You have made such a difference for our Dianjiang Kids. Thank you!

Kelly
Posted by About First Hugs/Dianjiang Kids at 6:31 AM No comments:

We've been back 10 days from our second adoption trip to China. We have the same Gotcha Day for both girls - June 28th.

Finally developed the film from the cameras we sent to our second
daughter's healing home in her care packages. Amazing! Even though I had seen many photos of Teagan, posted on the Angel Home webpage, during the 4-month wait for her, these photos are precious. They show our daughter smiling, crying, sleeping, eating and playing. Her surroundings are bright with natural light, large play areas, and loving caretakers - male and female. The rooms were so nice that I wonder what she is thinking of our 1928 1800 square foot city house! LOL! We have been in contact with the director of that home since our return back to the US and have received more photos. We have a book of letters written to her from the nannies. We have clothing and gifts they sent with her on Gotcha Day. The photos of her being well cared for, happy and loved touched me deeply and bring us great peace for the 12 months she had at Angel's Home. I am hoping that one day it will also bring her peace to know she was so loved and cared for.


These also brought back memories of our older daughter's pictures - from the camera we sent to Dianjiang while we waited 6 weeks for her in the spring of 2004. The discrepancy between our girls pre-Gotcha Day care is striking. This was before Gracie's room at DJ. Before foster care. Before the renovations to the Dianjiang SWI. The contrast between our two daughter's early lives makes me even more grateful for the work this group has done for DJ children. In those photos, we see our first child standing or sleeping in a shared crib in small room, crowded with cribs and little else. Peeling paint, no air conditioning, dirty matts and blankets. While incredibly, despite her surroundings, she is often smiling in those photos, we see other children with vacant looks, banging heads, or crying in those photos. I saw those same looks when we were allowed to visit her room at DJ. To be fair, there are also some photos of the girls on the breezeway on blankets alone or on saucy bouncers. I know those who traveled with us that June saw the same things.

I truly believe the nannies did the best they could with what they had resource-wise at that time. I know they played music for example for the girls and we even received two cassettes of music from DJ and a nice book and letter. Moreover, at 11 months our older daughter came to us severely malnourished and weighing 13.5 pounds, but crawling, eating solid foods, saying some Chinese words, laughing and giggling, dancing to music and able to grasp objects. I know she received attention from
her caretakers to get her to those milestones. Still, there were only 2 nannies in that room of many girls.

I've been reading some opinions on whether babies and toddlers have memories of their lives before they were adopted. Eight months after being home with us, at 19 months, our older daughter looked at me one day, and out of the blue said, "Mommy, I used to stand in my crib and cry a lot. But, it's ok now. I don't have to do that anymore." And then she cried.

I don't know if this was a real memory or not and there are many other possible explanations. I probably won't ever know for sure, but it was spoken from the heart when she said it. She had never heard me say she had done this or seen herself in a photo crying in a crib.

I don't want to be overly gloomy here. Our older daughter is a beautiful, gifted, athletic, exuberant child. I am inspired by her spirit and resilience. She is something else! Still, I grieve for her, or her first 11 months of care. At the same time, my commitment to DJ is renewed as I see what is possible in pre-adoption care in Teagan's case.
Posted by About First Hugs/Dianjiang Kids at 7:14 AM 1 comment: 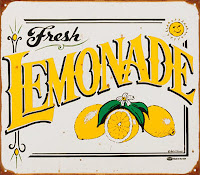 My Kids had a lot of fun running a lemonade stand fundraiser. We set up close to local bike path on a Saturday afternoon. Even though we only charged 50 cents a glass we raised $40 for Dianjiang Kids. Most people donated an additional few cents. The latest fundraiser idea we are working on is to collect recyclable bottle & cans and give deposit $$ to Dianjiang Kids. We'll keep you posted on how much we raise with this new venture.
Posted by About First Hugs/Dianjiang Kids at 2:10 PM No comments:

Many thanks. We reached our goal and will be able to sponsor the remaining 3
children at Dianjiang You guys rock. Thank you all!!

Moya
Posted by About First Hugs/Dianjiang Kids at 2:00 PM No comments:

Help us to Continue to Support Fostercare at Dianjiang Kids 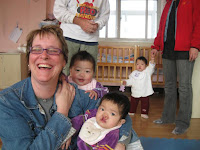 Thanks to all who have supported Dianjiang Kids. We are so lucky to have a group of parents and friends who have supported foster care and Gracie's Room and made such a difference in the lives of so many children and their families. Times has been tough for many. We are seeing this in the level of sponsorship. We have paid for sponsorship of 14 children at Dianjiang in March for the full year. We make our second payment in August for the remaining 11 children in foster care. That payment will be $5280. We have less than $1000 left in our bank account. And these children are not sponsored.

As a board we are considering reducing the number of children we sponsor. In fact, we will have no choice. But first we decided we would bring the situation to our parents and friends. So I am asking you. Would you be able to sponsor a child or help sponsor a child?

I got an e-mail last night from an anonymous donor with a really cool idea. The donor will match every $10 donation in the next week, with another $10 donation UP TO $500!! If we had 50 people donate $10 each and the donor matched that,we would have $1000 total!!.

If you can donate $10 please go to www.dianjiangkids.org and donate now. I'd love to double every donation. Thanks!!( and if you already donated in the last 24 hours, your $10 will be matched!!)

Posted by About First Hugs/Dianjiang Kids at 1:56 PM No comments: